In The Wolfman, the 1941 black and white film, the tragic protagonist is undone when he gives his friend a silver-headed walking cane. In the final scene, the Wolfman is brought down by this cane, and the cruel reality of the situation is shown to the surviving characters.

In the new edition of The Wolfman that released in 2010, there are movie posters that show another wolf-headed, silver cane.

Many of the great, classic horror movies are showcases for elegant and sophisticated walking canes. Bram Stroker's Gothic tragedy Dracula has been reproduced in film several times, and the gentlemen that walk throughout the various films are often depicted with their walking canes.

Dr Jeckel, or is it Mr Hyde, is often pictured in his high-class dress, sporting his walking cane. Dr. Frankenstein, even the famous characters of Gothic American authors like Edgar Allan Poe often walked with canes, like Detective Dupin of the Purloined Letter and The Murders of the Rue Morgue. And think of Sherlock Holmes... Can you picture him without a walking cane and a stout, curving pipe? Even Jude Law as Watson in the newest rendition of the classic detective stories is shown on this movie poster with a walking cane.

So why do all of these stories of the Gothic times present themselves as such good places for a walking cane collection to appear? The answer is actually quite simple.

For centuries, gentlemen carried swords or daggers, often very ornate, as a sign of their wealth as well as a way to defend themselves. With the rise of firearms, armor, swords and other bladed instruments were made obsolete. To replace this sign of wealth, gentlemen began carrying walking canes. Even in the United States, John Adams and George Washington walked with ornate walking canes. 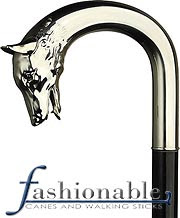 The Gothic Era of literature follows the American and French Revolutions, beginning in the early 1800's. At this point, walking canes were a staple in mens' fashion. Part of the romance of Gothic literature is how it plays into the lives of the wealthy and well-to-do. Often the protagonist is a gentleman, or walks in circles with the wealthy of the land. In all of these cases, it is only natural for a person in any Gothic tale to walk with a sturdy cane in hand.

So, whether you believe in the wolfman, or you just like the look of the wolfman cane, you can rest assured that you aren't the only one, as there is a long tradition of walking canes in Gothic stories.

The Best Walking Canes To Buy Men in 2022